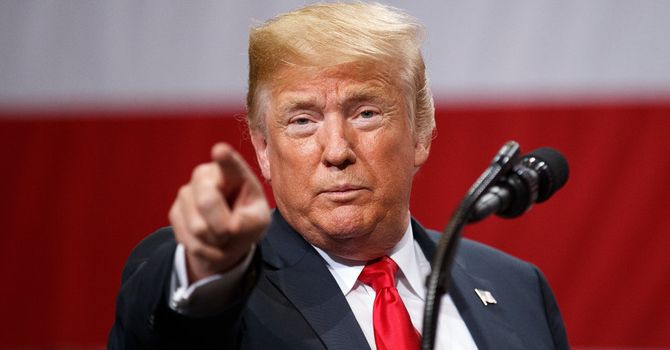 The United States stock market might be worth nearly $2 trillion more if not for the trade war.

Consider that the cost that investors appear to be ascribing to President Trump’s efforts to upend decades of trade relationships.

Typically, it’s hard to know why stocks are up or down over short periods. And the 5.8 percent gain in the Standard & Poor’s 500-stock index this year might seem to be one of those inscrutable moves. But a closer look at the factors that usually drive the stock market suggests that the escalating trade tensions are holding stocks back.

Two things happened at the start of the year that worried investors. First, soon after the S. & P. 500 hit an all-time high on Jan. 26, stocks plunged on fears that the Federal Reserve might raise interest rates more quickly than expected. Then, at the end of February, the Trump administration announced plans to impose tariffs on steel and aluminum, the first clear shot in the trade war.

Since then, neither the economy nor the Federal Reserve has sprung any nasty surprises. When investors dumped stocks in February, they were reacting to an unexpectedly strong number for wage growth. Since then, though, the economy has grown, adding on average 215,000 jobs per month, without an acceleration in wage growth, which investors track to gauge inflationary pressures. Friday’s jobs report for July showed annual growth in wages of 2.7 percent, in line with the monthly average this year.

And the Fed does not appear to be a threat right now to the stock market. Investors expect the central bank to raise interest rates twice more this year rather than once, which hardly constitutes a slamming of the brakes. In fact, the Fed said Wednesday that its monetary policy was still set to ensure that the economy remained buoyant.

What is more, the bond market seems to agree that the economy can keep growing without a breakout in inflation. The yield on the 10-year Treasury note was expected to trade at 3 percent or higher in the second half of this year as the economy picked up, according to The Wall Street Journal’s Economic Forecasting Survey. But it has mostly traded below that threshold all year.

On their own, a steadily growing economy and relatively supportive Fed policies would normally provide a springboard for stocks. But investors have had another reason to bid stocks higher: Corporate earnings have been coming in stronger than expected.

So far, second-quarter earnings have exceeded Wall Street analysts’ estimates for all 11 industry sectors of the S. & P. 500, according to researchers at BofA Merrill Lynch. Sales have surpassed estimates in nine sectors.

So to what degree have Mr. Trump’s trade battles tainted the bullish stock market conditions?

One way to tell is to look at valuations, which reveal the underlying mood of investors. Right now, the S. & P. 500 is trading at 16.6 times what analysts expect its companies to make over the next 12 months, according to data from FactSet. But in the three months before the trade tensions really heated up at the end of February, the S. & P. 500 on average traded at 17.8 times earnings.

Applying that higher multiple to stocks today would take the index over 3,000 points. Such a rise — 7.5 percent from Friday’s level — would add $1.8 trillion to the value of the stock market. The higher-than-expected corporate earnings would arguably support a higher valuation.

What happens next? While Mr. Trump appeared willing to forge some sort of trade truce with the European Union, his metals tariffs are still in place and the actions against China are escalating. A big test for investors comes next month, when the Trump administration might impose $200 billion of extra tariffs on China. Given their size, the stock market may actually fall if those go ahead.

If the Trump administration blinks and delays putting the tariffs into effect, it will signal a retreat from its plans to radically recast the United States’ trade relations. But there could be a consolation prize: American investors may get to enjoy the nearly $2 trillion of gains that the trade war has apparently so far denied them.

« Previous Is Economic Growth Buoyant or a Blip? Here’s How to Invest Either Way
Next » Peloton’s New Infusion Made It a $4 Billion Company in 6 Years