Home » Politics » Trump warns of stock market crash if he's impeached: 'Everybody would be very poor' 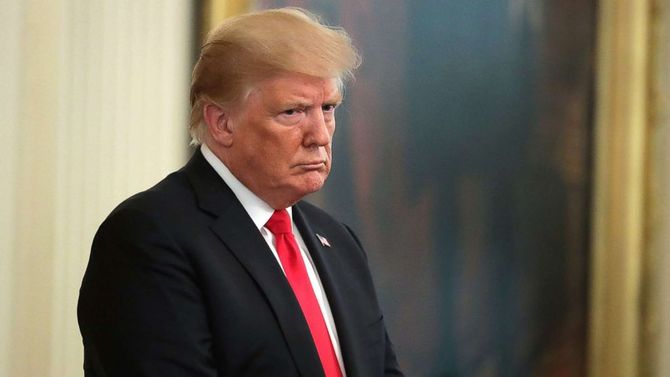 Two days after President Trump's former personal attorney pleaded guilty to illegal campaign contributions, the president said Michael Cohen’s actions do not amount to campaign violations, while also warning that the stock market would tank if the Democrats win control of Congress and move to impeach him.

"I don't know how you can impeach somebody who has done a great job," he told Fox News in an interview that aired this morning, giving his job performance an A-plus rating. "I will tell you what, if I ever got impeached, I think the market would crash. I think everybody would be very poor."

As for Cohen, Trump said his hush-money payoffs were not campaign related.

"They didn't come out of the campaign, they came from me," Trump said.

Cohen has pleaded guilty to eight counts and said he made illegal campaign contributions "in coordination and at the direction of a candidate for federal office," namely Donald Trump.

In response to why Cohen would implicate him, the president said it was because Cohen could make a "better deal when he uses" the president, adding that Cohen only worked for him part-time.

Cohen pleaded guilty to violations that included playing a role in alleged hush-money agreements with Stormy Daniels and Karen McDougal, two women who claim to have had affairs with Trump.

The president has denied the alleged affairs.

Turning to Paul Manafort, who was found guilty of tax fraud this week, the president told Fox News he has great respect for his former campaign chairman but was not explicit about whether he would pardon him.

To the question of whether the media is the enemy of the people, as the president has repeatedly asserted, Trump said “absolutely not, but the fake news is.”

He added that 80 percent of the news is a lie and he cited “lunatics” in reference to The New York Times.

He held up the media’s coverage of his meeting with Russian President Vladimir Putin as an example of their perceived shortcomings.

Despite his view that that the “press doesn’t cover [him] fairly,” Trump said he would give his performance an A-plus, touting his regulations and a strong economy.

« Previous The Note: Words matter, even in the age of Trump
Next » Should These Tests Get a Failing Grade?