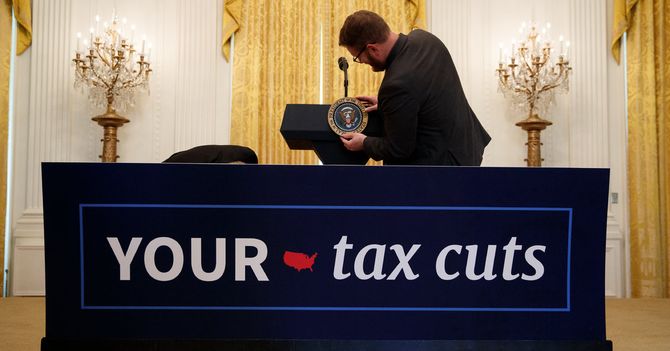 American companies are set to hand a record amount back to shareholders in the coming quarters.

Corporate boards have authorized the repurchase of $754 billion of stock so far this year, up 80 percent from the same period last year, according to a Goldman Sachs report. And that figure could reach a record $1 trillion by the end of the year.

The surge in buyback announcements is likely to stoke further debate about the $1.5 trillion tax cuts enacted late last year. The overhaul reduced the corporate tax rate to 21 percent from a high of 35 percent and provided a permanent break on overseas profits. The White House and congressional Republicans said the tax bill would encourage companies to make long-term investments and would provide “rocket fuel” for the American economy. Democrats argued the legislation would lead to an increase in share buybacks and wouldn’t stimulate corporate investments.

So far the pace of hiring has picked up this year, though wage growth has remained stubbornly slow, and business investment in equipment increased more slowly in the first half of the year.

Companies in the Standard & Poor’s 500 stock index purchased a record $178 billion of their own shares in the first quarter of 2018. Apple, a big beneficiary of the new tax law, has ramped up its repurchases this year. Through the first two quarters of this year, the iPhone maker bought $43.5 billion of its own stock, the most on record for a six-month period, according to Howard Silverblatt, a senior index analyst with S.& P. Dow Jones Indices.

At a time when other stock investors — households, mutual funds and pension funds — are selling shares, buybacks could be a source of demand in the coming months, Goldman said. That could be particularly the case for the shares of technology companies. The sector has accounted for 40 percent of the buybacks authorizations this year, but only 21 percent of the actual stock purchases.

Still, Goldman does not expect buybacks to lift the S. & P. 500 much this year. The firm predicted the index will finish 2018 where it currently trading: 2,850.